Physician shortages abound, and increases in the number of new physicians entering the workforce remain modest. Yet, recruiters are still tasked with sourcing quality physicians from a limited pool of candidates. Recruiters are competing for the relatively small pool of new physicians and struggle to effectively reach the largest pool of physician candidates — experienced physicians who are not looking for a new position.

Executive Summary
This article summarizes the results of a blind survey conducted by Digital Research, Inc. (DRI), an independent market research firm, for NEJM CareerCenter that sought to understand the job-seeking behavior of U.S. physicians. Particular attention was given to jobseekers not taking active steps to search for new employment opportunities — the so-called “passive jobseeker.” In an attempt to better understand the nuances of passive jobseekers, the survey sub-divided these jobseekers, estimated their relative proportion among all physician jobseekers, and suggested tactics to reach the passive physician jobseeker.

To uncover these insights, NEJM CareerCenter contracted with DRI to conduct a blind, independent study among physicians. In early 2013, DRI surveyed a total of 2,969 physicians to understand job-seeking behaviors. Of those 2,969 physicians, 1,000 were asked to complete a more detailed survey to delve into more specific behaviors.

As part of the survey, physician participants were asked to choose only one of the pre-defined categories (see Figure 1) to describe their job-seeking behavior: The titles for each group were appended after the survey was completed. Figure 1 illustrates the overall composition of the participants based on their job-seeking status. It’s clear that a very small percentage — only 14% (made up of the Very Active and Semi-Active groups) — is spending any amount of time looking for a job.

The vast majority of physicians surveyed are considered passive jobseekers and not actively spending ANY amount of time looking for a job. While the Super Passives, Explorers, and Tiptoers make up the majority of the group at 86%, the Explorers and Tiptoers (although not actively looking) have identified themselves up front that they are open to discussing job opportunities. 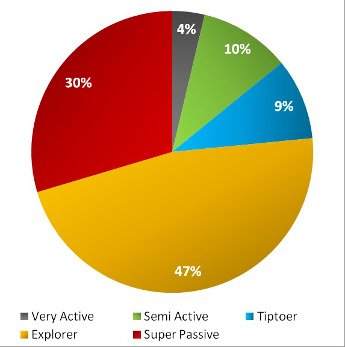 Key Findings
Relatively few physicians are actively seeking employment opportunities.
Only 14% of physicians are searching job listings, attending job fairs, or actively looking for employment. According to survey results, the two active groups — Very Active and Semi-Active — apply for more jobs, are less satisfied with their current job, and tend to have had short tenures at their prior job. In general, these two groups are not difficult to reach for recruiters, since they use as many channels to find employment as possible and tend to be over-represented in job board profile databases.

A small portion of physicians are curious, but not aggressively seeking employment opportunities.
Only 9% of physicians are in the Tiptoer category, meaning they have only started to network with friends and close associates about employment. This group is not visiting job boards and soliciting help from recruiting firms so they are difficult for recruiters to identify and reach.

Passive jobseekers may be more desirable.
Physicians who are satisfied with their current position and have been in the position for 10 or more years mostly fall in the Super Passive or Explorer segments, whereas those with lower satisfaction and tenure fall mostly into the Tiptoer or Semi-Active segments (see Figure 3).

Most physicians are not actively looking.
The vast majority of physicians — 86% — are not taking an active role in seeking new employment opportunities. The three groups of inactive job seekers in this study — Tiptoers, Explorers, and Super Passives — are difficult to engage by recruiters since the physicians are either content in the current job and not interested in changing employment, or they will entertain new opportunities but only on their own terms.

Passive jobseekers are not quite so passive.
Although this group of Super Passive physicians (making up 44% of the total surveyed) initially said they were not interested in new job opportunities, they also said they would likely click on a job posting that appeared next to clinical content that they were reading while on a journal or association website. For recruiters, there are tactics available to reach even the most passive candidates.

Suburbia and longevity are keys to low turnover.
The survey showed that when a physician is employed in a suburban work environment AND has worked at their current employer for 10 years or longer, they are likely to be a Super Passive and not overtly interested in changing employment.

Hospitalists appear to be more restless in their employment status.
There is a larger proportion of hospitalists in the Very Active segment. Hospitalists have spent less time in their current job, are less satisfied, and are more likely to engage in a variety of job-seeking activities.

Most physicians are open to new job opportunities.
Passive jobseekers are not a single block of physicians, but can be segmented into subgroups based upon their level of activity and interest in employment opportunities. The Explorer segment of physicians represents nearly half of all physicians and appears to be more amenable to direct solicitation than the Super Passives.

For more Takeaways for Recruiters and to find out how to reach passive job seekers download the full white paper at: nejmcareercenter.org/passive.

Conclusion
It may not be a surprise to most recruiters that the majority of physicians are not actively seeking new employment. However, the survey suggests that most physicians are at least curious about select relevant job opportunities and are open to discussing them. Unfortunately, passive physician jobseekers are finicky about how they are approached with opportunities and unsolicited contact is often not welcomed.

One very effective approach to reach passive jobseekers identified in the survey is placing job postings adjacent to clinical content. It is a strategy that puts the physician in control of the outcome and reaches them in an efficient, time-saving environment.