The Medicus Firm is a national healthcare recruiting firm,
specializing in permanent placement of physicians and
advanced practice providers. This annual report summarizes all 2015 provider placements (or hires) made in partnership with The Medicus Firm, at hundreds of health systems, hospitals, and medical groups nationwide, in a variety of practice structures and types of communities. The objective of this report is to analyze national healthcare recruiting and placement activity, and in turn highlight new and ongoing trends and statistics, particularly in physician placement.

All data is presented as a percentage of total placements made in 2015 with client companies of The Medicus Firm,
unless otherwise noted. Figures represent hundreds of placements made throughout the year, at more than 200 hospitals and health systems nationwide.

For the first time in the history of The Medicus Firm, placements in urban settings (with a population of more than a half million) surpassed placement volume in rural and mid-sized community settings. This increase in search and placement activity in urban and metropolitan areas is indicative of the intensified level of competition for physicians, regardless of how desirable or attractive a particular practice location may be. 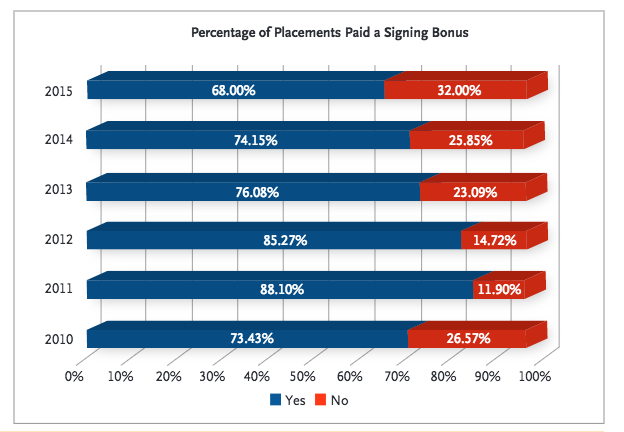 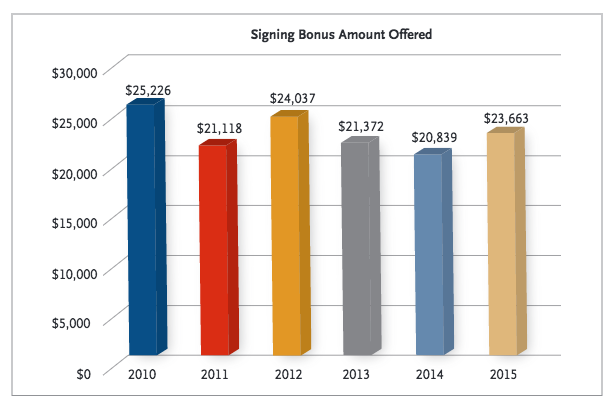 While the average size of signing bonuses and relocation bonuses increased for 2015, the percentage of placements paid a signing bonus actually decreased slightly.

This is likely due to the increase in nonphysician placements and academic physicians, which are traditionally less likely to receive a signing bonus than physician employees of a for-profit or not-for-profit
community hospital or health system. Additionally, the largest signing bonus paid to a physician placed in 2015 was a staggering $250,000. Combined with other forms of student loan forgiveness and repayment options sometimes provided by employers or by the government, signing
bonuses help physicians pay off their substantial student loan debt, which averages $166,750, according to a CBS news report on the topic.

Income guarantees are a complex form of compensation similar to a forgivable loan. These guarantees used to be very common, and were once a popular way for hospitals to help physicians to establish their own private practice. However, clients of The Medicus Firm have largely abandoned private practice in favor of employment, based on the placement percentages for 2015.

While there are many benefits for physicians practicing as employees, physicians often indicate they wish for more
autonomy. More physicians are choosing employment out of necessity, than by personal preference.

About the Medicus Firm
The Medicus Firm (www.TheMedicusFirm.com) is an award-winning, leading healthcare search firm specializing in the permanent placement of physicians and advanced
practice clinicians. Since 2001, The Medicus Firm (TMF) has partnered with hospitals, health systems, academic medical centers, and physician groups nationwide to provide comprehensive recruitment services in community settings ranging from rural to metropolitan.