The Medicus Firm is a national healthcare recruiting firm, specializing in permanent placement of physicians and advanced practice clinicians. This annual report summarizes all provider placements made in 2016, in partnership with The Medicus Firm, at hundreds of health systems, hospitals, and medical groups nationwide, in a variety of practice structures and types of communities. This report is available to industry executives to help analyze national healthcare recruiting and hiring activity and highlight new and ongoing trends in the healthcare workforce and physician recruiting.

Signing bonuses increased in average amount and utilization rate in 2016. Including physician and non-physician placements, 88 percent of candidates placed were paid a signing bonus. Additionally, 4.2 percent of physicians were offered a six-figure signing bonus ranging from $100,000 to $200,000.The average physician signing bonus paid in 2016 was $24,802, up from $23,663 in 2015.

Placement rate of advanced practice clinicians increased significantly for the fourth consecutive year.
Placements of physician assistants (PAs) and nurse practitioners (NPs) has grown steadily since
2012, when only 1.32 percent of total placements were non-physician providers. In 2016, nonphysician advanced practice placements comprised 12 percent of total provider placements, up from 8.3 percent in 2015. Physician assistants were the 2nd most frequently placed provider, and nurse practitioners were also among the top ten providers.

Primary care comprised the majority of physician placements again in 2016.
Hiring of internists, pediatricians, and family practitioners accounted for 35 percent of placements made in 2016.

Employment vs. Private Practice: Physician employment as a practice model continues to dominate physician recruiting activity nationwide, with 91 percent of physicians placed being hired as employees. This is consistent with 2015 employment rate of 92 percent.

Hiring of osteopathic physicians (DOs) declined to its lowest rate since 2012. However, the rate only fluctuates within a range of about five percentage points. Eight percent (7.98%) of physicians placed in 2016 were DOs, compared to 11.74 percent in 2015. According to AACOM, seven percent of practicing U.S. physicians are DOs, and 20 percent of medical students are studying osteopathic medicine.

Advanced practice clinicians, to include nurse practitioners (NPs) and PAs comprised 12% of total placements, up from 8.3% the previous year. Placement of nonphysician providers has grown steadily since 2012, when only 1.32% of placements involved NPs or PAs.

International medical graduates are a vital component of the physician workforce in the U.S., particularly in light of projected physician shortages through 2025. IMGs include all physicians who graduated from a medical school outside of the United States, whether they are American-born, or foreign-born. All IMGs must successfully complete a process managed by the ECFMG (Educational Commission of Foreign Medical Graduates) to verify their medical degree and complete medical residency training in an American training program.

Most foreign-born IMGs come to the U.S. on a J-1 or H-1B visa. Federal agencies such as the VA, HHS, and others can sponsor J waivers. Additionally, each state can sponsor 30 J waivers through the Conrad 30 program.

This year, the most placements occurred in mid-sized communities with a population ranging from about 25,000 to half a million. The proportion of total placements made in rural communities (pop. < 25,000) declined slightly from 32.02% in 2015, to 26.4% in 2016, the lowest in at least four years, which is likely a factor of intense market competition for physicians, as it often impacts rural communities the most.

New developments for 2016 include the high volume of placements for advanced practice clinicians. Physician assistants were the 2nd most frequently placed provider, after steadily climbing the ranks over the past few years. Nurse practitioners debuted on the Top 10 list as the 7th most frequently placed provider for 2016. Placements of general surgeons grew from 8th place to 6th place, and psychiatrists returned to the list in 8th place, after a brief absence from the top specialty placement list. Orthopedic surgery dropped out of the top ten for the first time in several years. 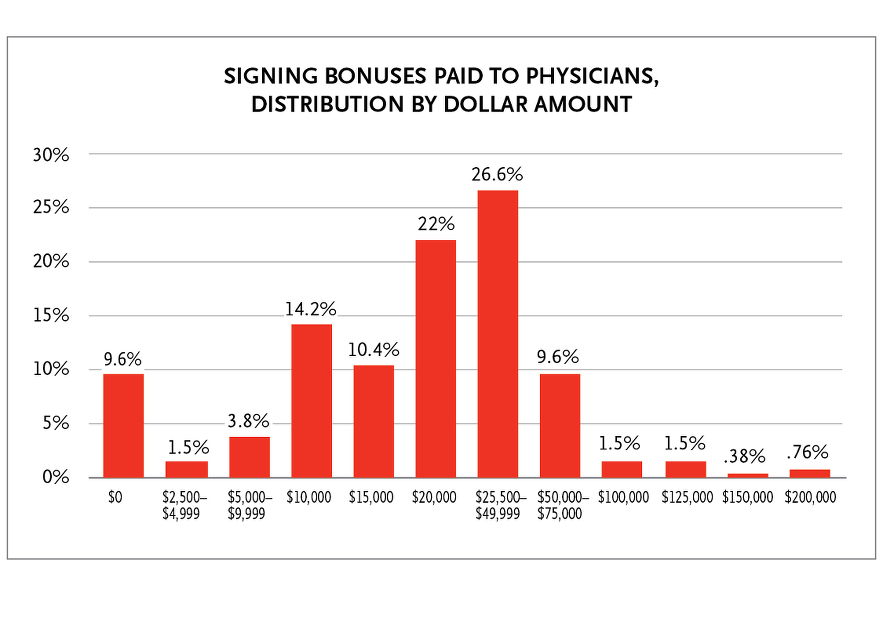 All data presented in this report are based on placement records of candidates hired by clients of The Medicus Firm in the calendar year of 2016, unless otherwise noted. The figures represent hundreds of placements made at more than 250 hospitals and health systems nationwide.

*Throughout this report, the term “typical” indicates the median response.