The Medicus Firm conducted its 12th annual Physician Practice Preference and Relocation Survey in the spring, and released the results in the summer of 2015. Respondents answered 19 questions via an online survey, the link to which was sent directly to physicians, PAs, and NPs. A total of 2,685 providers representing 19 specialties and 50 states completed the survey, which included practicing physicians, as well as some residents and fellows. As it does each year, the survey included questions regarding compensation, practice preferences, motivation, job searches, career goals, and industry trends.

Jim Stone, president of The Medicus Firm says “Our annual survey helps to keep our associates and clients in touch with what physicians want out of a practice, and what’s most important in their career, as well as what are the greatest concerns of practicing physicians today. We appreciate the physicians who take the time to participate and to help their voices to be heard.”

Highlights from the survey include:

Physicians’ opinions of health reform, i.e., the Affordable Care Act (ACA) softened moderately. This year, 16.74% of physicians gave the ACA an “F” as an overall grade for effectiveness, compared to 22.35% last year.

Stone adds “This year’s survey revealed a number of interesting opinions from physicians and other advanced practice providers. We were pleasantly surprised that physicians are a bit more optimistic this year regarding several issues including compensation and health reform. This is great news. Meanwhile, some results from the 2015 survey were much the same as previous years – for example, residents remain more focused on practice location than experienced doctors, and are much less likely to prefer a small town. While we place new doctors in small communities quite a bit, they can be a bit tougher to open up to more rural areas when they begin their search.” 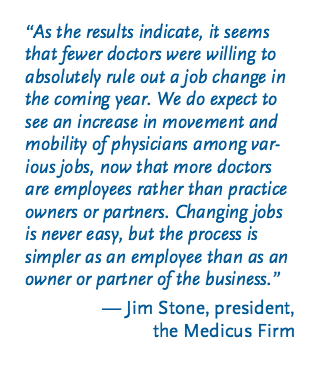 The most favored practice setting remains single-specialty group (30.3%) for practicing physicians, while residents and fellows showed a preference for hospital-employed practice (26.1%).

Solo practice declined further from favor to 4.9% (from 7.7%) among practicing physicians. Meanwhile, government and military practice increased in popularity from 2.5% to 4.1% of respondents selecting it as their most desirable practice structure.

Physicians’ opinions of health reform (ACA) softened moderately. When asked to grade the ACA, the percentage of failing grades declined in each of five categories/ objectives, including the overall grade. This year, 16.74% of physicians gave the ACA an “F”, compared to 22.35% last year.

Could the coming year bring increases in physician turnover? Only 34% of physicians completely rule out a career change within the next year, compared to 43.1% last year.  Additionally, more of the physicians considering a move are doing so for financial reasons (31.1%) vs. 25.3% who were money motivated last year.

For a copy of the full survey, please email surveys@TheMedicusFirm.com and reference the RPT/NEJM.

About Medicus Firm
Since 2001, The Medicus Firm has partnered with hospitals and physicians’ groups nationwide to help them meet their physician recruitment needs.

The Medicus Firm has grown into one of the largest physician search firms in the industry through excellent client satisfaction, employee engagement and retention and industry stewardship.